From 8th Nov 2023, Bandai unbanned all the promo cards for Asia except the promo Franky Shougun.

One Piece Card Game was introduced in Japan and Asia through 4 starter decks on July 8, and the first booster set Romance Dawn on July 22.

As of July 2022, contributions from OPTCGReview

Less than a month into this card game, there is not enough collected information to formulate a strong tier list. However, it is looking very much like a triangle where Red > Purple > Green > Red.

Red with pure rush has the tendency to outpace opponents with their "Rush" effect and high attack power.

Purple if allowed to ramp mana early game, they can be at 10 mana by turn-3 for a Kaido to clear the board.

Green is best represented by Red/Green Law right now as it is packed with half a deck of 1-cost characters to swarm the board, search, and block. The 5 cost Law will just replace the 1 cost ones as beat sticks afterwards. This is probably the best deck for consistency in game right now.

Blue is the punching bag as it suffers from not having a good finisher.

There is a total of 4 colors in One Piece Card Game, each synonymous to a unique playstyle.

Below are the Pirate Crews and Archetypes and their general playstyles.

[Trigger]: When a card is added to your hand from your Life, you can choose to activate this effect by revealing the card and discarding it to the Trash.

[Counter]: When one of your Leader or Characters is being attacked, you can choose to activate this effect by:

[Don!! xN]: This card needs the indicated number of Don!! attached to activate its effect.

[Don!! -N]: Return the indicated number of your Don!! from the field to the Don!! deck to activate the effect.

(N): Rest the indicated number of Don!! in your Cost Area to activate this effect.

"Blocker" : When your opponent attacks, by resting this card, you can change the attack target to this card.

"Rush" : This card can attack the turn it is played.

"Banish" : When this card deals damage, Trigger effects are negated, also send the card to the Trash instead.

From the One Piece card game official website, the basic knowledge of the cards in the battles have been revealed in Japanese.

There is 5 different types of cards in One Piece Card Game. They are Leader Card, Character Card, Event Card, Stage Card and Don Card.

Condition to win the game: 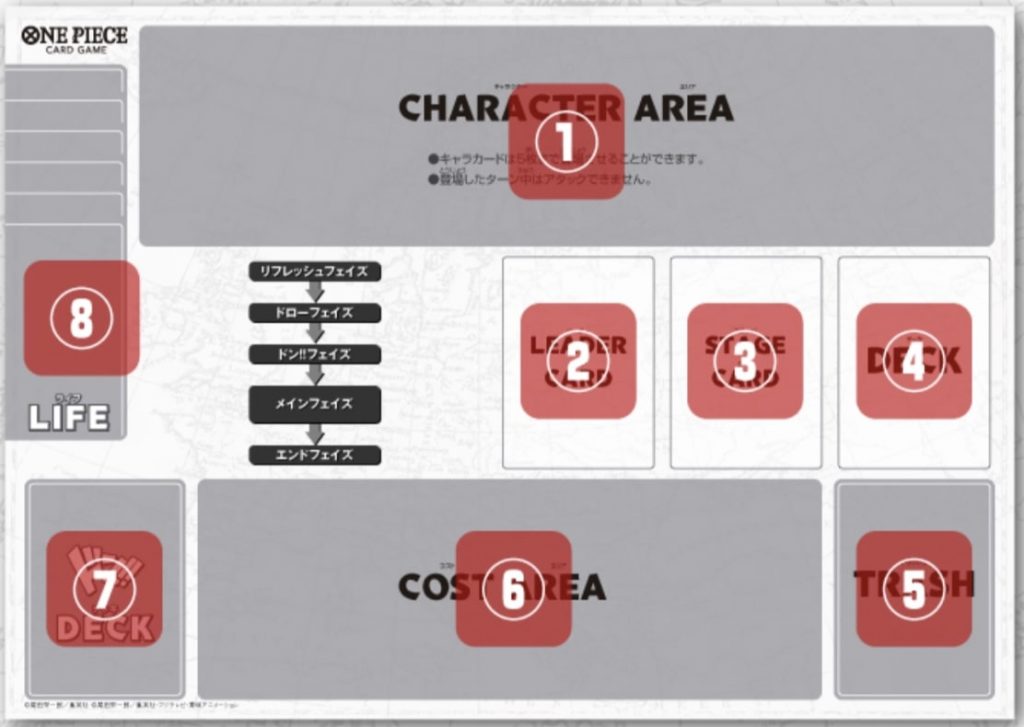 You can do below 4 bullets in any order

Effect that lasts "until the end of this turn" are negated, and your opponent's turn starts.

Translated from the Rulebook, Credit to Woddish (Discord account)

Setting up the board:

1. Both players must place their deck in the Deck Area before revealing their Leader.

2. Life cards can be placed and taken in any order.

3. You must return all attached DON!! to the DON!! Area in the Refresh Phase.

4. When a Character's Power is reduced to 0 it is not destroyed.

5. DON!! x # effects activate even if you have more than the designated number of DON!! attached.

6. Different cards with the same name can each activate their [Once per turn] effect.

7. If you have 5 Characters on the field, you must send 1 of them to the trash when you play another one, and the Character sent to the trash does not activate its [When K.O.] effect.

8. You cannot use Characters on the field to Counter, you can only use Counter from cards on your hand.

9. If being attacked, you can also use Counter to boost the Power of Characters not battling, but their effects last until the end of the battle you used them in.

10. You do not pay the Play Cost of a Character when using it as a Counter

11. You must activate a Character's [On Play] effect when played, unless it has a cost, in which case you can choose to activate it or not.

13. You cannot activate [Blocker] if that Character is the target of the attack.

14. You can boost the Power of a card that use [Blocker] with Counters.

15. You must send the Life cards to the trash if you deal damage with a Character with [Banish].

16. You must deal 2 damage if you successfully deal damage with a Character with [Double Attack], even if you lose the effect or the attacker is removed.

17. You do not win if you deal damage with a Character with [Double Attack] and your opponent only has 1 Life.

18. You can choose to not activate [Trigger] and add that card to the hand instead.

1. Attack Step: Rest one of your Characters or Leader to attack your target (Can be opposing Leader or a rested opposing Character).
If there's [When attacking] effects, they will activate as soon as you declare your target.

2. Block Step: The attacked player can activate one of their Characters [Blocker]

3. Counter Step: The attacked player can activate as many cards with [Counter] from their hand as they can.