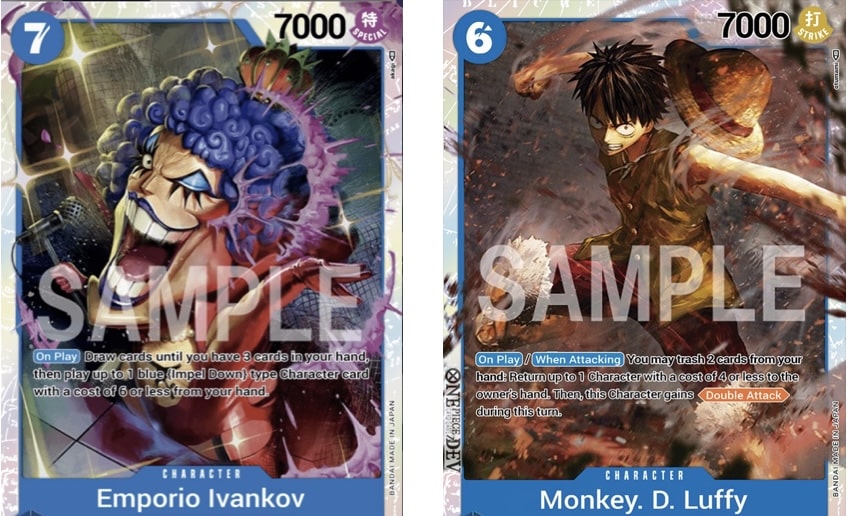 In OP2 meta, the only blue deck that can stay noteworthy in this meta is Ivankov Impel Down deck. It is rather a straightforward but fun deck to play. Here is my version of Impel down, and I prefer to go first if possible. 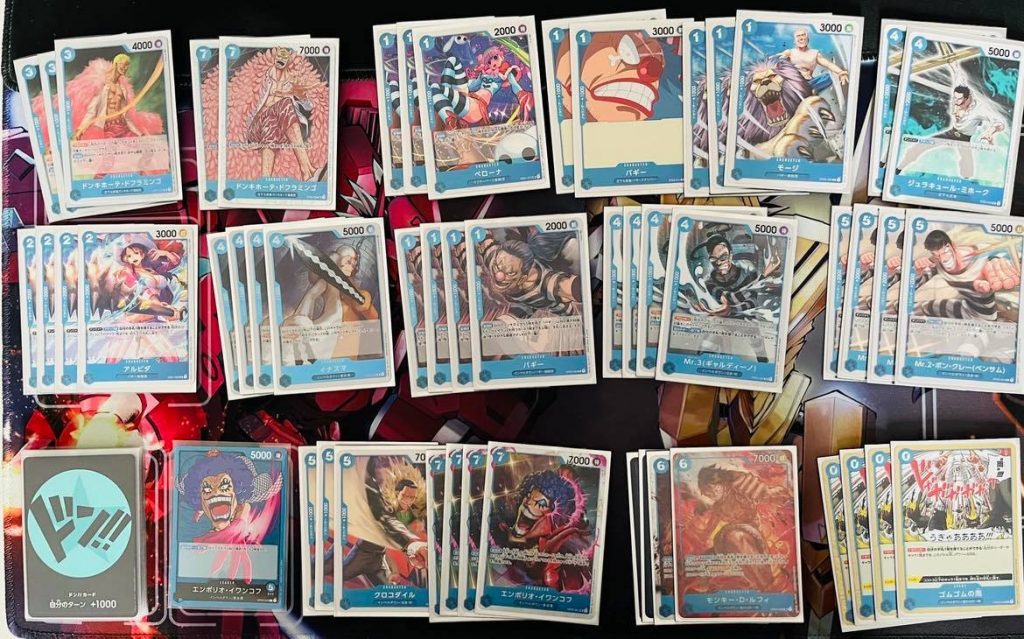 The main combo of the deck is, of course, play 7-cost Ivankov then got Luffy summoning for free. 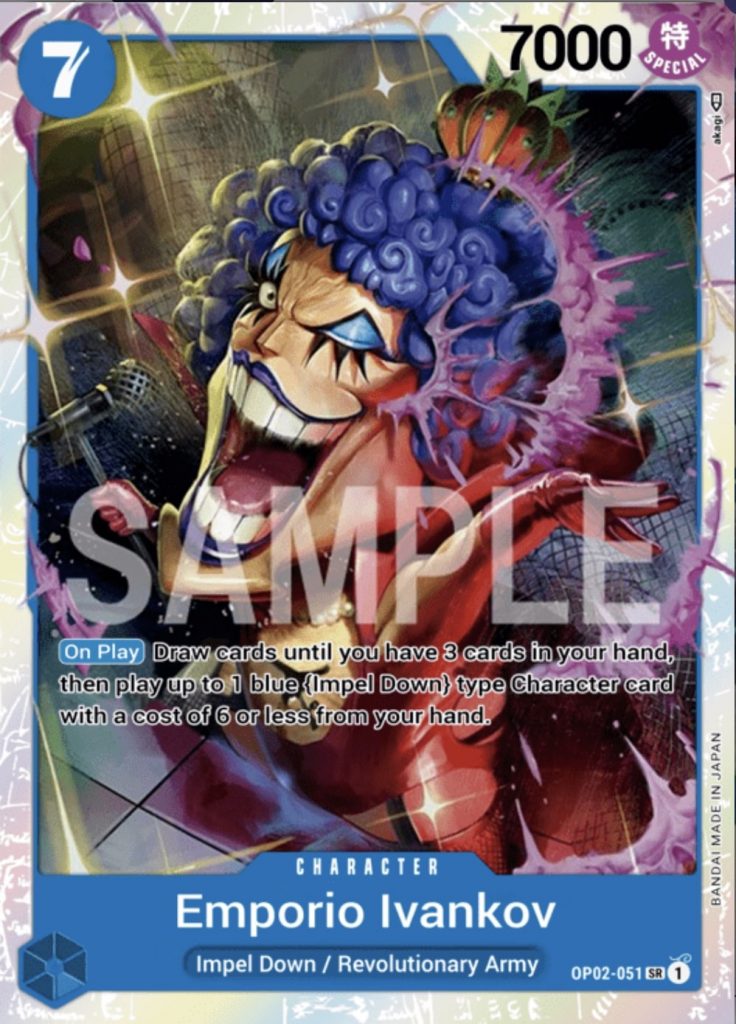 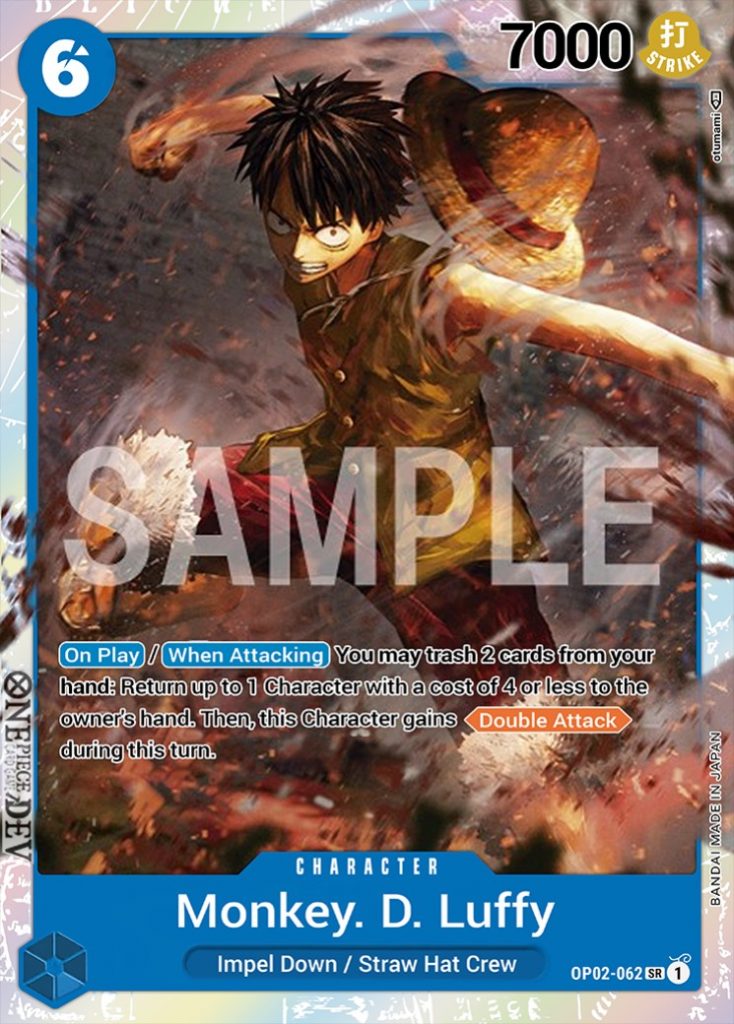 Why do I want to go first turn?
I guess going first or second is quite important for the game strategy, especially in the current Zero-rush meta. If I go first, I will play 1-cost Buggy to search for an Impel Down card then in the turn-2 I would use 3 DON!! attached to this character to attack the Leader for Life. Opponent's can choose to counter or let it go through, I usually will rush in turn-2 for 2 attacks (Buggy and Ivankov Leader) when opponent don't have many cards in hand or no powerful characters on board.
The Ivankov can be played in my turn-4, with Luffy summoned for free hopefully we can have a little control on the game's situation. Luffy can return 1 opponent's character with 4 cost or less to its owner's hand, we can use it to return blocker or any character with potential threat. Getting "double attack" from this character for the next turn would make opponent move to their defensive strategy, 7000 power for both Ivankov and Luffy are totally save and cost less power to protect them. I included 4 copies of the 0-cost event card Gum Gum Rain to protect Luffy mostly.
In my turn-5, if the opponent played the 5-cost Law blocker then I will play 7-cost Doflamingo to return it to hands to allow Luffy's attack to go through. Law blocker is used a lots in both green/red Zoro or mono green Oden decks. 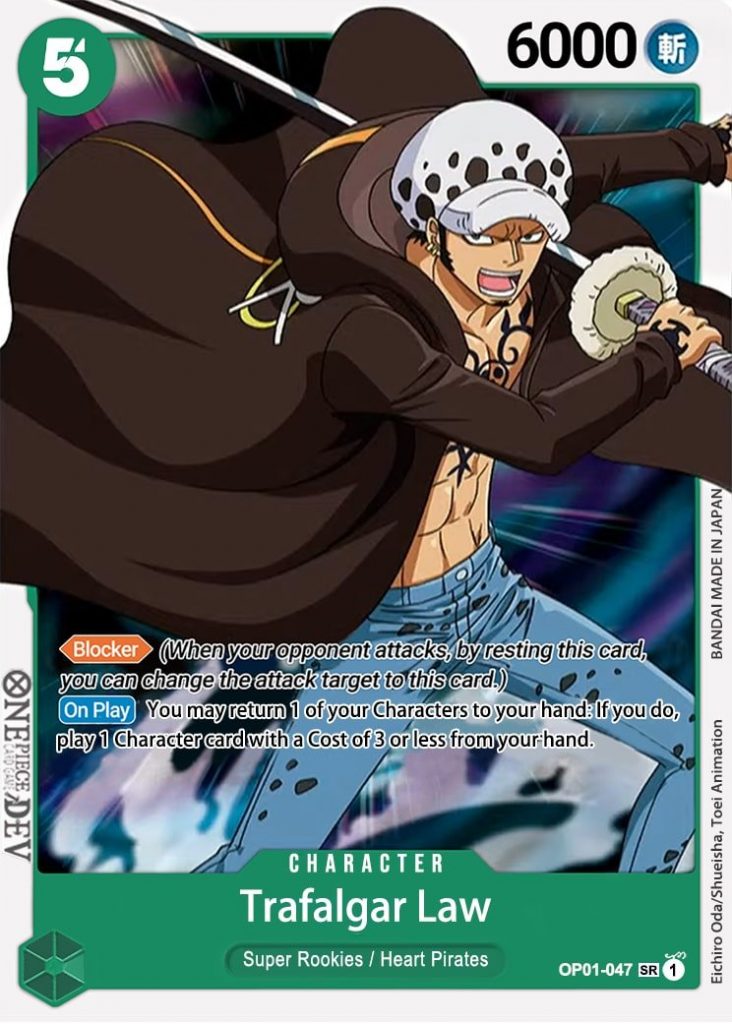 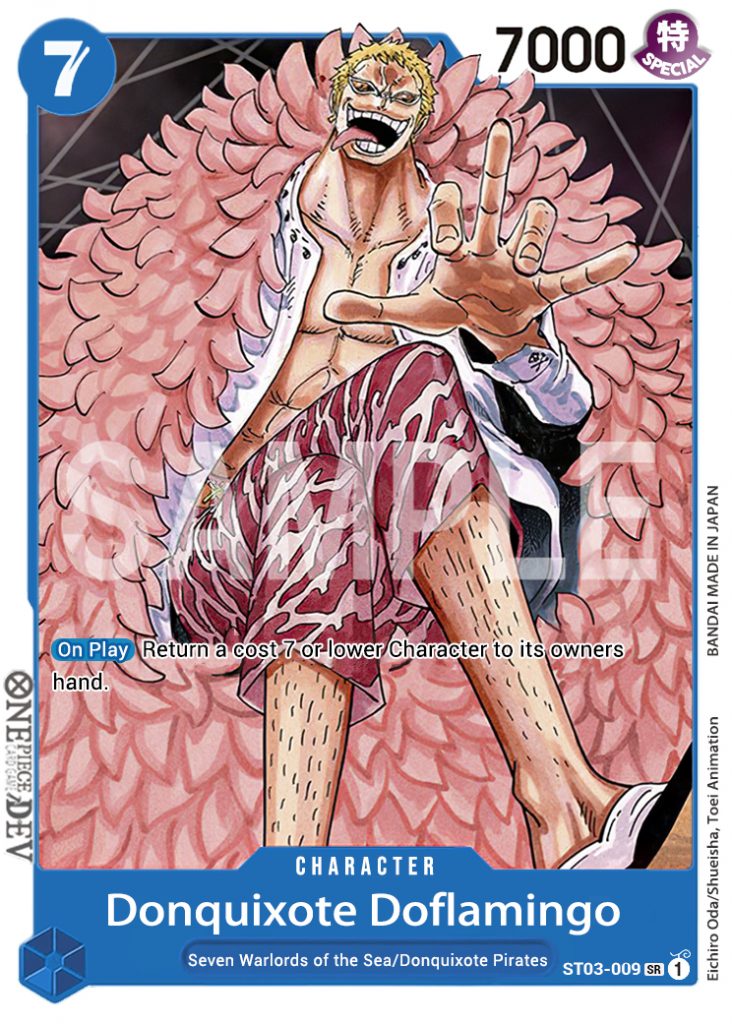 Even though Ivankov "On Play" effect can draw up to 3 cards, but I rarely got the card I want with that little draw power, so I will always keep 1 copy of Luffy and Ivan in my hand if I draw them early. Else I have to play 3-cost blocker Doflamingo or 1-cost Perona to search or sort the cards I want to draw next.
So I consider my best first 5-card draw would be: 1-cost Buggy, Doflamingo blocker or Perona, Ivankov and Luffy, the last is 7-cost Doflamingo. 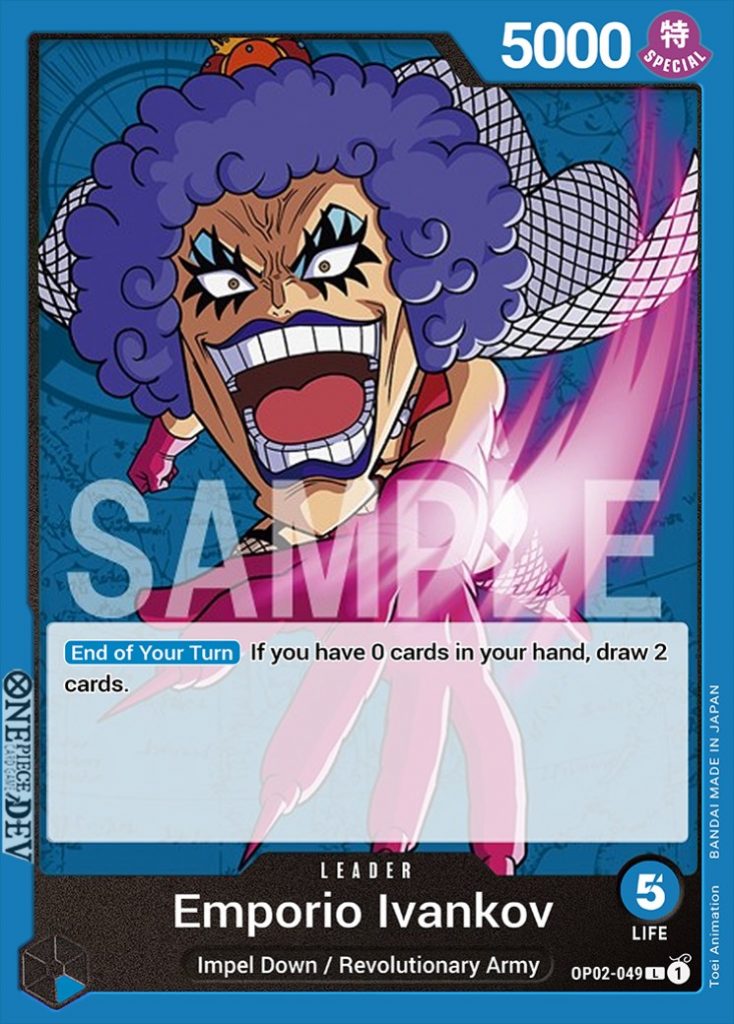 Ivankov leader is the element that (I think) makes the deck fun to play.
Originally I used the event card New Kama Land instead of Gum Gum Rain, but then I noticed the feeling of trashing too many cards is bad because you don't know what you will draw next when we trigger Ivankov Leader effect.
But when Luffy is played, as long as he stays on board, you will tend to trash 2 cards to trigger his effect, so Ivan's effect becomes very useful after turn-4.

There are 2 Impel Down blockers, Galdino and Inazuma. People normally likes to use Inazuma but I always prefer Galdino. Simply because I can use Galdino to attack then I make him active again at the end of the turn (by trashing 1 card from hand).

Galdino and Ivankov leader have the "End of Your Turn" effect which is same timing. There is the time when I have no card to trash to trigger Galdino effect, then I will use the Ivankov's effect to draw 2 cards then trash 1 to set Galdino active. 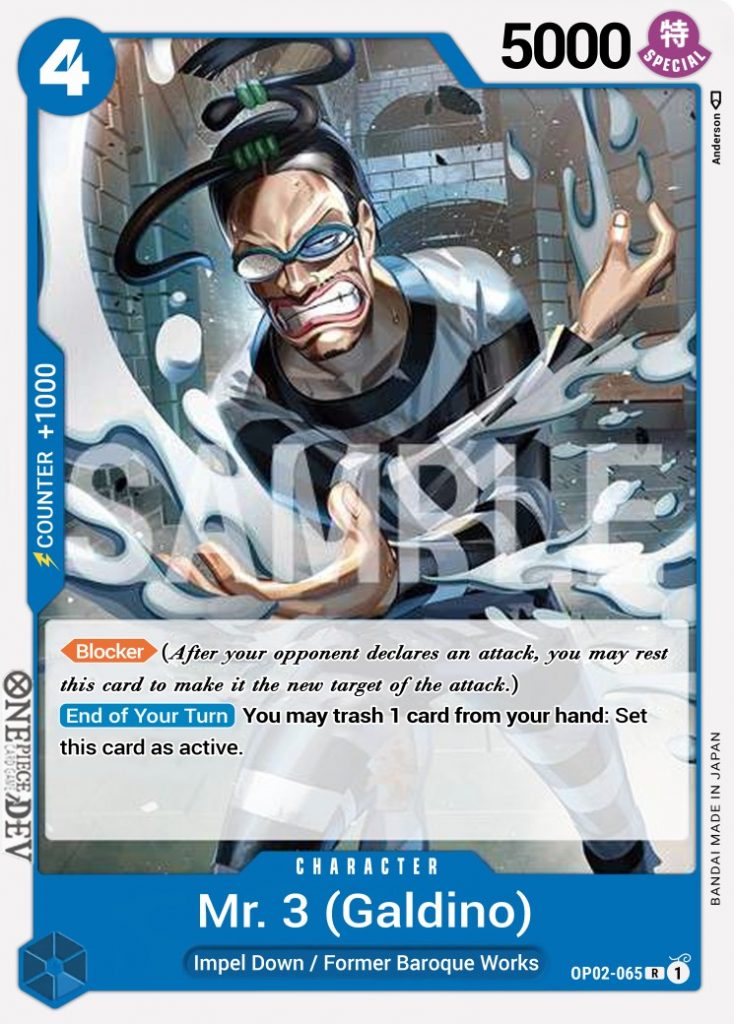 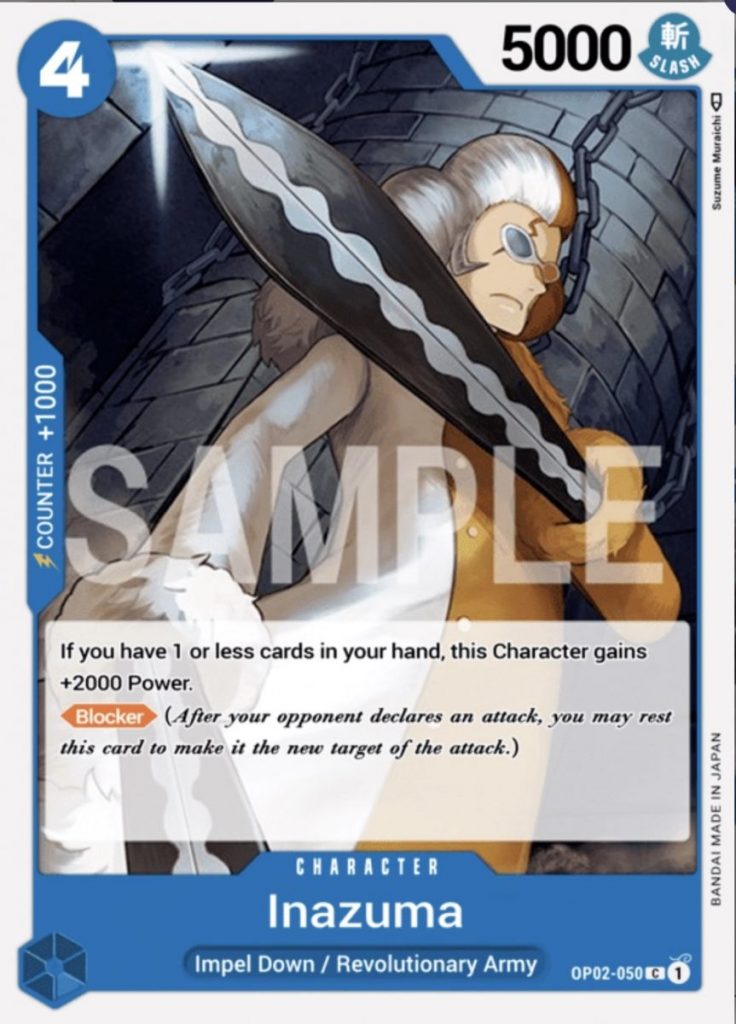